So easy to make, this Vanilla Rhubarb Syrup is great added to ice cream floats, drizzled over ice cream, or used as a flavouring in your adult beverages. 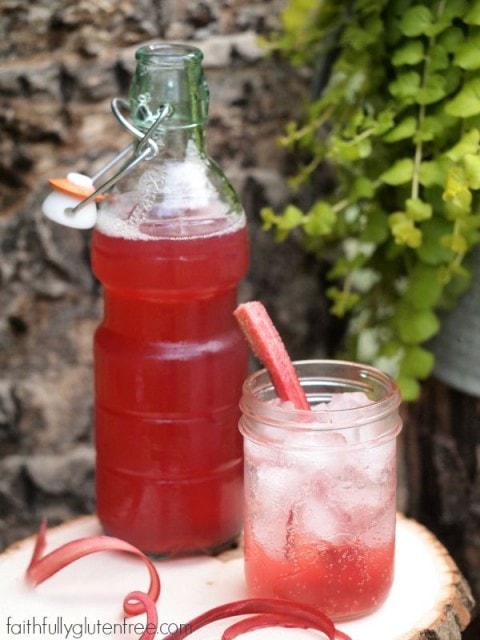 A few weeks ago we had a really bad hail storm in south-east Manitoba. We got hit with golf ball sized hail. If you follow me on Instagram or Facebook, you’ve seen the pics. Until then, I was so pleased with how well my new raised garden beds were growing. After we got with that kind of storm, I wasn’t sure what to expect. Would anything survive? Everything was shredded. The tomatoes had a lot of broken branches, the lettuce was mush, and the rhubarb leaves were completely torn apart.

Thankfully, most of the garden is looking really good now. The lettuce is thriving, the beans and peas are setting on, and the cucumbers are beginning to climb up their cages. The only thing that isn’t looking great is the tomatoes, since some of the plants now have blight. Time will tell how much they produce before they dry off completely.

After the hail storm, I harvested a bunch of the banged up rhubarb. Although I was tempted to make another pan of the Strawberry Rhubarb Bars, I decided to try something new instead. I made a simple Vanilla Rhubarb Syrup.

A simple syrup is just that – simple. It is basically taking equal amounts of water and sugar, and cooking them until the sugar is completely dissolved. With this Vanilla Rhubarb Syrup, you cook the sugar and water with some chopped rhubarb and a split vanilla bean. If you don’t have the vanilla bean, don’t fret – it still tastes great without it, but then it would just be Rhubarb Syrup. In this case, I decided to decrease the amount of sugar slightly. Is it still a lot of sugar? Of course! But you won’t be drinking it straight up, you will be adding it to other things, so it gets diluted quite a bit. 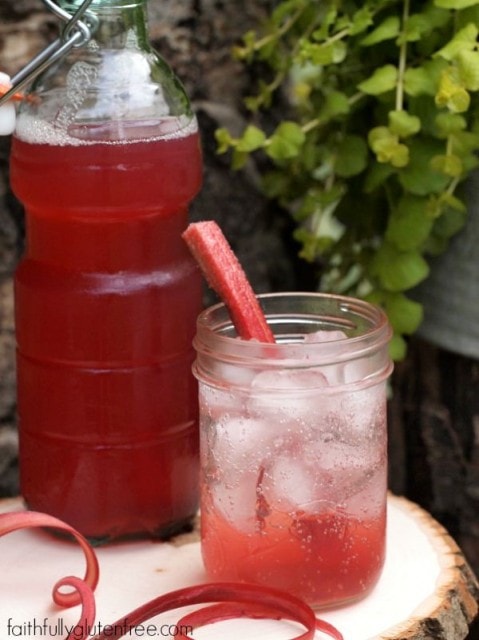 This syrup can be used any way you wish. Vanilla Rhubarb Syrup added some great flavour to Sprite and rum, and was also great in an ice cream float made with vanilla ice cream and Sprite. It is also refreshing added to pitcher of lemonade, or drizzled over a bowl of ice cream or vanilla yogurt. It would also be delicious brushed over a gluten free vanilla cake, helping to preserve moisture, and tasting great at the same time.

If you've made this recipe, I'd love if you could leave a star review and comment. Share it to Instagram and tag @faithfullygf or use the hashtag #faithfullygf . I'd love to see it!

Jeanine Friesen is the creator of gluten free recipes that are so good, you can't tell they are gluten free. Her site, Faithfully Gluten Free, has been helping the gluten free community live a life filled with delicious food since 2008. She has also published a beginner guide for those on the gluten free journey called "The Everything Guide to Living Gluten Free".