These are the Best Gluten Free Cinnamon Buns you’ll find, I promise! Soft, sweet, sticky, and as good as that wheat-based cinnamon bun from your past.

Seriously, folks, if you try one recipe for gluten-free cinnamon buns, I hope it’s this one.

These gluten free cinnamon rolls have an ooey-gooey caramel topping which you cook up and put in the bottom of the baking pan. They make the cinnamon buns nice and sticky.

Once the gf Cinnamon Buns have finished baking, you flip them onto a serving tray, making that gooey syrup that you put in the bottom of the pan, a great sticky topping making these the best Gluten Free Cinnamon Buns. Some people refer to them as gluten free Sticky Buns because of this caramel topping. 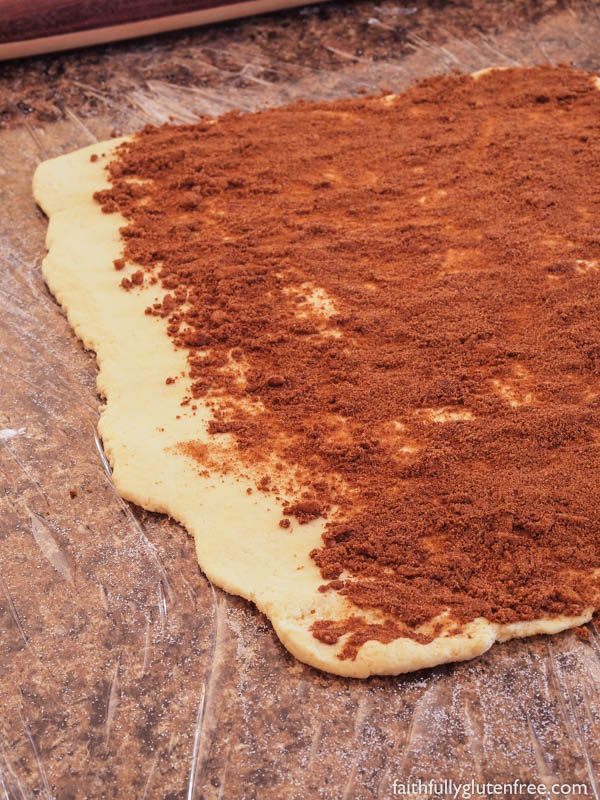 This recipe is based on the same cinnamon bun recipe that  I received in my grade 10 Home Ec. class from Mrs. Braun.

Mrs. Braun was an older woman who really knew her way around the kitchen & sewing. I learned a great deal from her, and still use a lot of what I learned in her classes today. She could never get my name right – always calling me by my Mom’s name, since she had also been my Mom’s teacher at one time- but she was one of my favourite high school teachers. 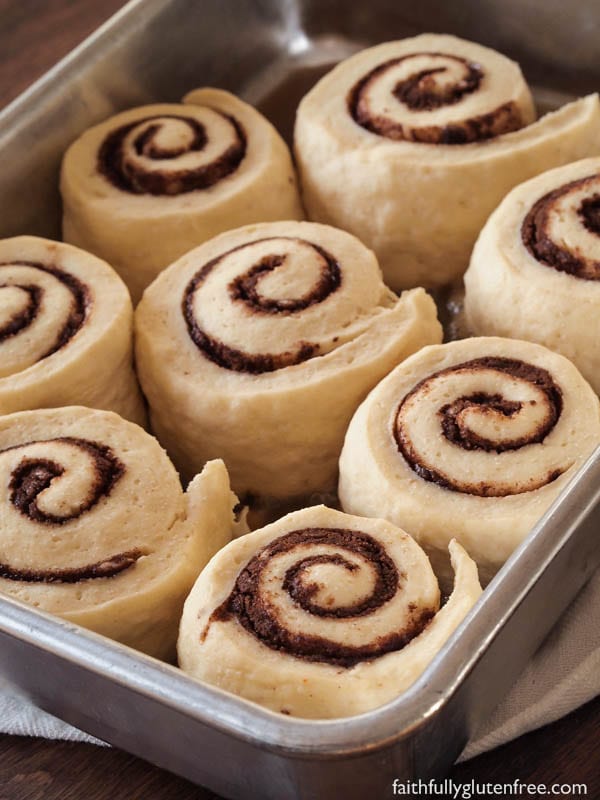 This recipe for gluten free cinnamon rolls is the only recipe that I received in home ec that I still continue to use to this day – 25ish years later. Some things are worth holding onto. I had to make some changes to make things gluten free – not only with the ingredients, but also with the techniques.

The recipe has been tweaked in the past 20+ years, but has always been a favourite. I hope you will enjoy this gluten free version of Mrs. Braun’s cinnamon rolls. I bet I could bake these for her, and she would never know they were gluten free. 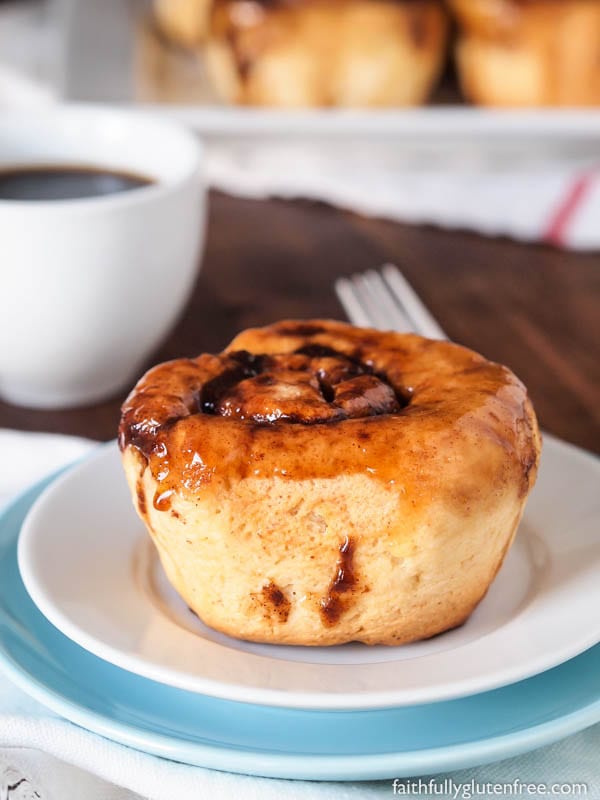 Tips to make these Gluten Free Cinnamon Buns ahead of time:

These gf Cinnamon Rolls are great to make ahead of time. I have had success forming the rolls, covering the baking pan with plastic wrap, and putting them in the fridge to bake at a later time (like in a few hours). You just have to give them a little more time to rise before baking if you do this.

You can also form the gluten free cinnamon buns, get them all prepped and in the baking pan, wrap it up in plastic wrap (a few layers is best), and put it straight in the freezer. Decide when you want to bake it (like Christmas morning), and take it out of the freezer the night before, letting it defrost (still covered) in the fridge.

In the morning (when you are awoken at 5:00 a.m. by the kids), remove the plastic wrap and place the pan of gluten free cinnamon rolls into a warm, draft-free place. I like to warm my oven slightly, and place the baking pan in there to get it nice & cozy warm. After it has risen, bake it, and it will be just as good as if you hadn’t made it ahead of time.

I would not recommend freezing it for longer than one week, but you can easily make it a few days in advance and use this method without a problem. 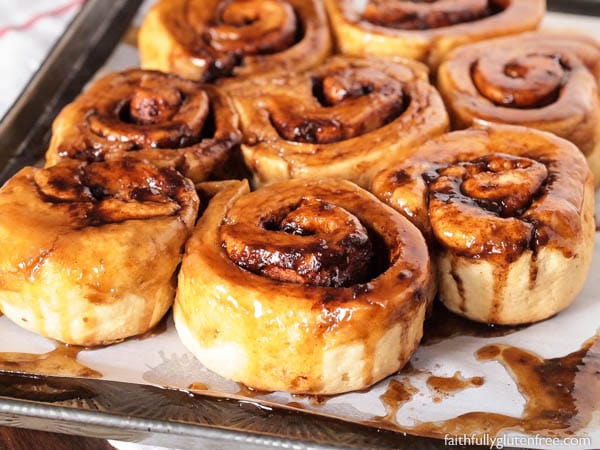 Other recipes that use the same (or very similar) dough that I think you will LOVE: 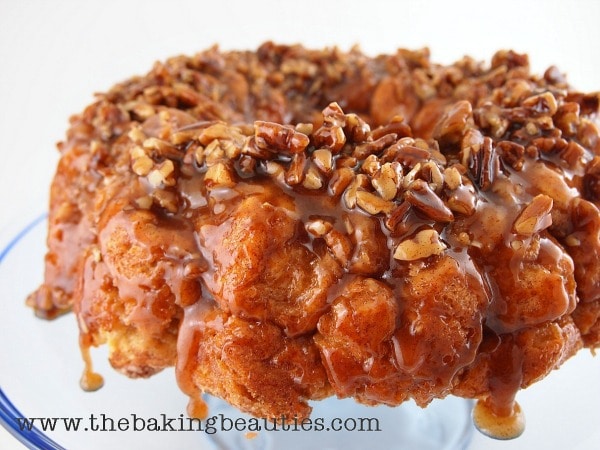 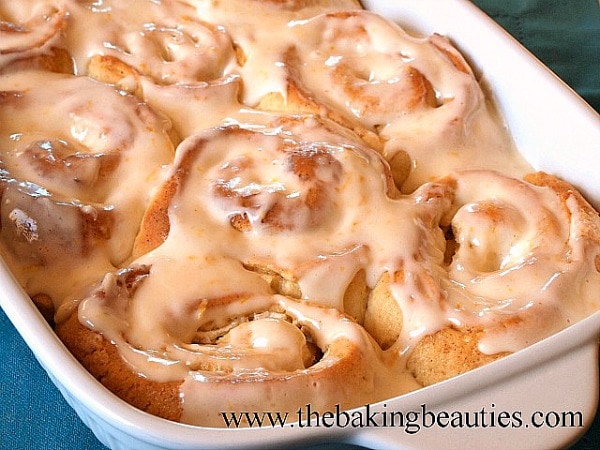 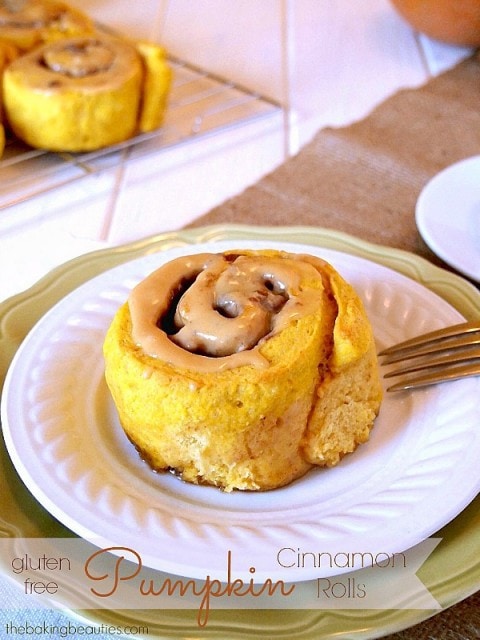 I know many, many of you have asked how to change this recipe so that it is both gluten and dairy free. After some playing around, these are the changes that I made.

REPLACE the heavy cream in the Topping with 2 tablespoons dairy-free milk.

It is also possible to make these gluten free cinnamon buns dairy free. By doing a few small changes (listed in the notes of the recipe), you will end up with a delicious, sticky, ooey-gooey gluten and dairy free cinnamon roll, just like these:

Don’t forget to PIN IT to your gluten free bread board. 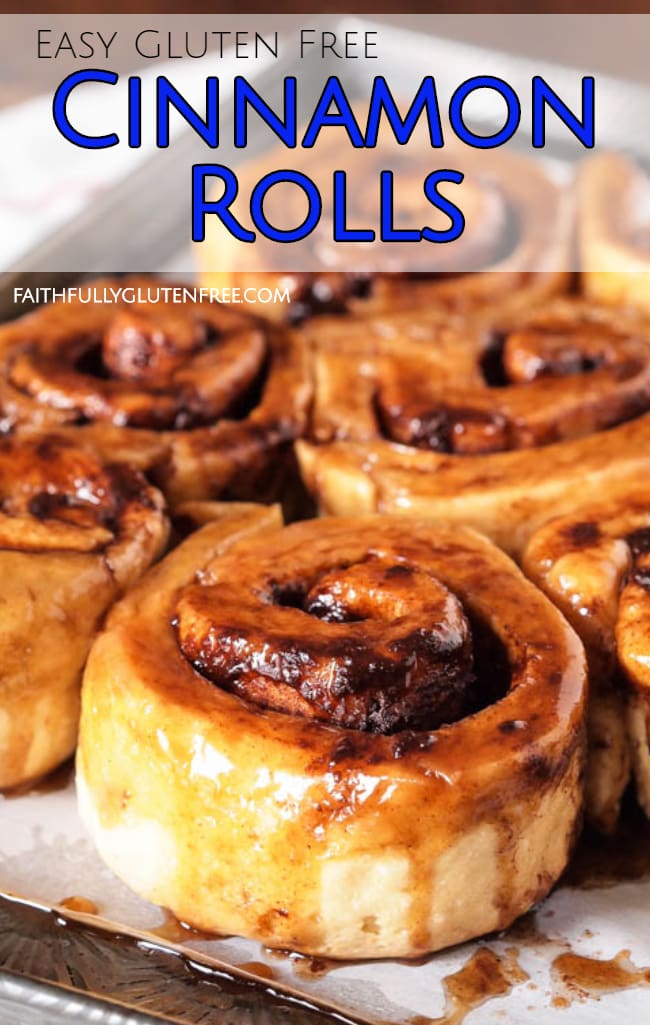 The recipe, and images, were updated February 2018.