Skip the store-bought soup from a tin and make this flavorful Homemade Canned Tomato Soup with a few simple ingredients from the garden.

When I was first diagnosed with celiac disease, one of the things that surprised me the most was that the store-bought cans of “cream of” soup all contained wheat. Thankfully, at that point, I was already making my own homemade canned tomato soup, so I didn’t feel too deprived.

Although I used to make this tomato soup just to be able to enjoy it, now that I need to eat gluten free, I make sure that I have enough tomatoes planted every year so that I can make enough soup to last us a year. It is a necessity now. 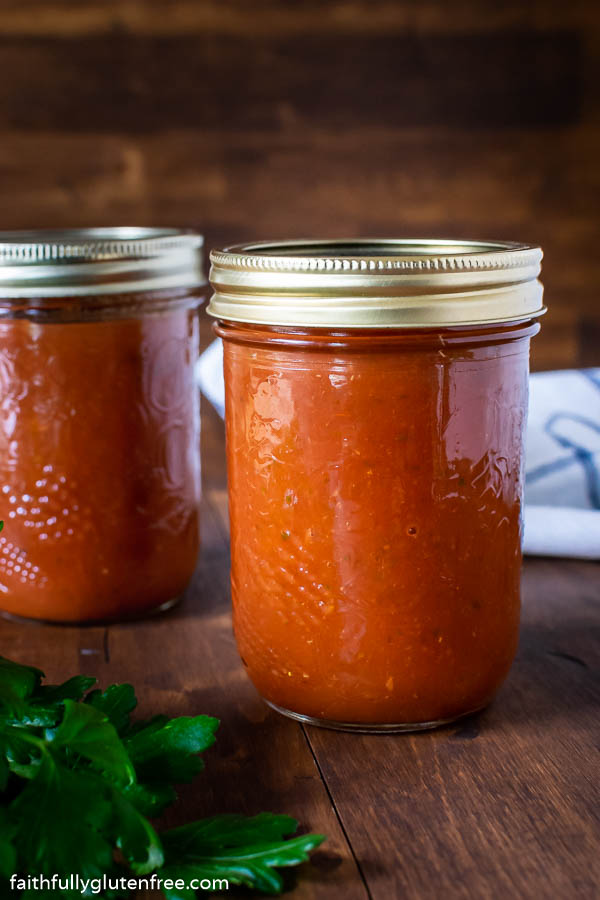 This recipe comes from my Mother-in-law, who has been making this recipe for as long as I’ve known her. Originally, I found the soup to be too spicy though. Like, beads of sweat on your forehead spicy.

But, that must have been a year for strong onions, strong peppers, and a few more dashes of cayenne, because I don’t find it to be too warm anymore. If you don’t want your soup to have any spice, feel free to omit the cayenne pepper. 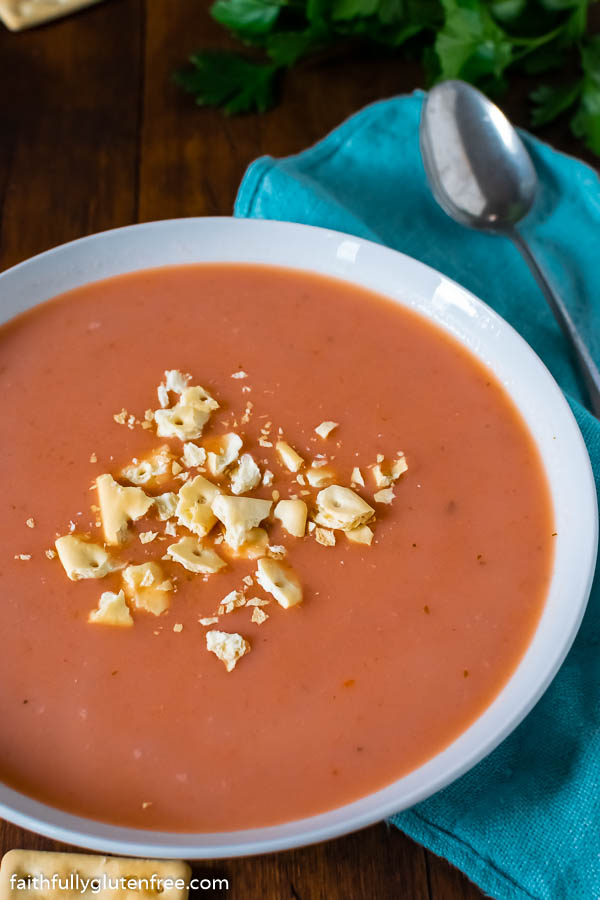 To prepare the soup after it has been canned, simply add your favorite milk, gluten free broth, or water. I do 1 jar of milk to 1 jar of canned soup, but you can do as little as half a jar for a stronger flavour.

Can I make this without canning it?

If the process of canning the finished soup scares you, you are not alone. You most certainly can still make this tomato soup, just freeze in freezer safe containers, defrost before using, and prepare the same way you would if it were canned. 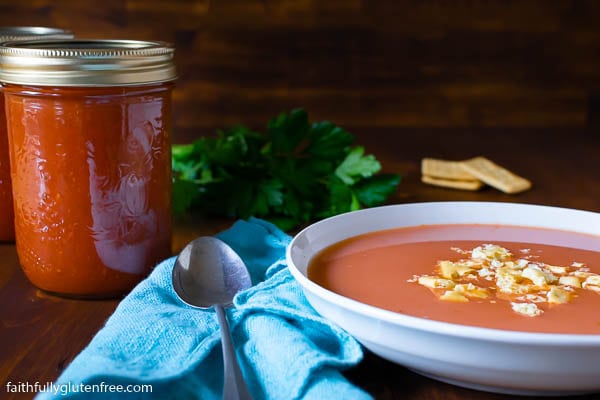 Thermflo is a modified cornstarch made from waxy maize. Ingredion Incorporated, the manufacturer’s of Thermflo, have released a statement saying that Thermflo is indeed gluten free.

When used in canning, Thermflo is more stable than cornstarch, which can become too thick to process safely, and then break down after canning.

Thermflo can be reheated more than once without breaking down, and it can also be used as a thickener in foods you freeze. It is great for canning and pie fillings, as it doesn’t separate over time like cornstarch does. It also stays clear when it cools.

You can buy Thermflo at some stores that specialize in canning and home-baking, I buy mine at Stonybrook Pantry in Steinbach, Manitoba. I’ve read that people are able to find it at Amish and Mennonite stores as well. If you can’t locate it locally, you can order it online through Amazon as well.

Still have leftover tomatoes? Here are more recipes that you can make using your bounty:

To Freeze:
Divide soup between freezer safe containers, leaving at least 1 cm (1/2-inch) room at the top to allow for the soup to expand.

To process in the pressure canner (directions come directly from Bernardin's website (http://www.bernardin.ca):

To serve the soup: Empty the contents of the jar plus an equal amount of milk, gluten free broth, or water into to a saucepan. Heat over medium heat, stirring occasionally, until soup is hot & steaming. We like to serve ours with tortilla chips, shredded cheese & sour cream for a quick, simple tortilla soup.

Do not can in jars larger than 500 ml (1 pint), or the soup may not heat through enough to be considered safe during the canning process.

If you are looking for an easier, quick tomato soup to enjoy for dinner tonight, be sure to check out my recipe for Creamy Gluten Free and Dairy Free Tomato Soup. It uses a tin of canned tomatoes and some fresh vegetables to give you a thick, hearty tomato soup in about 30 minutes. 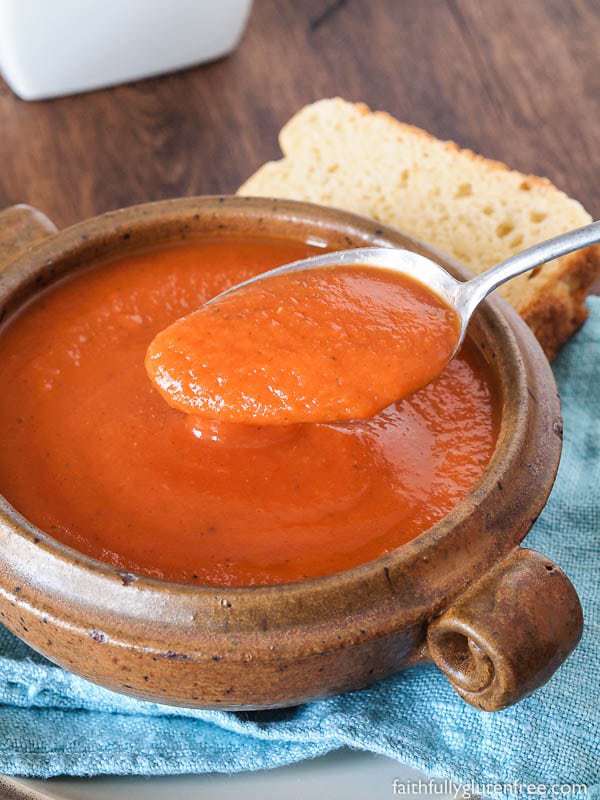 Don’t forget to PIN IT for later! 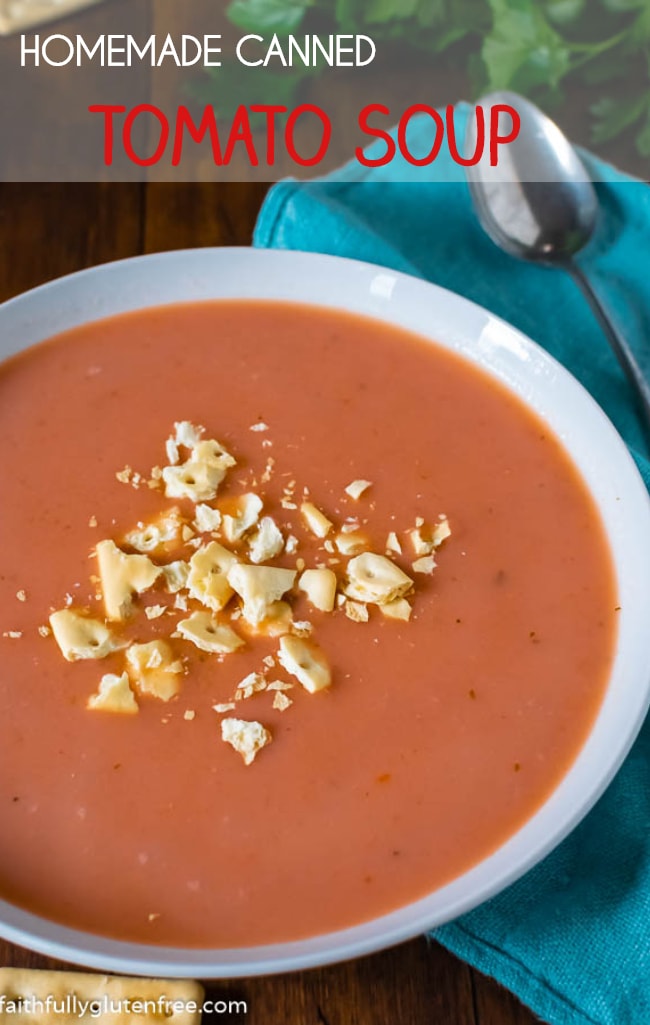 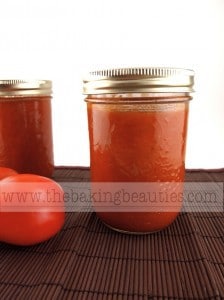